Mayor Fulop Announces the 4th Annual Jersey City Freedom & Fireworks Festival with the Largest Fireworks Display in the State With New York Harbor as the Backdrop for an Unparalleled Celebration of Our Nation’s Independence; 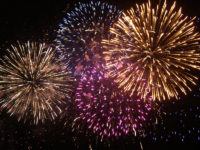 JERSEY CITY – Mayor Steven M. Fulop announces the return and the expansion of the one-of-a-kind Jersey City Freedom & Fireworks Festival at Exchange Place on Tuesday, July 4th, 2017 from 12 p.m. to 10 p.m. with more than 150,000 expected attendees. This year’s Fourth of July family-friendly festival’s location has moved from Liberty State Park to Exchange Place due to all state parks being closed due to a budget impasse.

Celebrate our nation’s freedom with fireworks dazzling the sky over the New York City Harbor which serves as a stunning backdrop as you celebrate Independence Day with kids entertainment, a smorgasbord of food, carnival rides, an expanded large beer garden, live performances, and a grand finale of breathtaking fireworks visible from both sides of the Hudson River. The FREE event is open to the public.

Among the multiple acts of the day, viral sensation Tim Kubart will be performing some of his Grammy award-winning children’s music. Jersey City’s own Kool & the Gang will headline the day of fun, taking the stage at dusk and performing classic fan favorites just before Grucci, America’s First Family of Fireworks puts on their nationally-recognized fireworks display. Grucci is a sixth-generation, family-owned and operated fireworks company that has developed a prominent reputation; having performed at eight U.S. Presidential Inaugurations, Olympic Games, World’s Fairs and earned the Guinness World Record for “largest fireworks display” ever recorded. With the downloadable Grucci Fireworks app, attendees will be able to sync the music for the fireworks performance directly to your smart phone.

Children can enjoy a variety of carnival rides, bounce houses, among other activities. And if that doesn’t wear them out, families can watch and dance to 14 different performers taking the stage throughout the day and night.

Adults 21 and over can also sip beer and sangria in the South House Beer Garden, now bigger to accommodate growing crowds. And everyone will have their pick of food after working up an appetite with over 20 food trucks serving a variety of patriotic plates.

This annual event was started four years ago after New York City’s fireworks display was moved to the East River. Mayor Fulop decided to fill the gap on the New Jersey side by revamping the Jersey City fireworks that were eliminated in 2008 due to budget cuts by the previous administration. Acquiring several sponsors and partners has enabled the resurrection of the Jersey City Fourth of July celebrations. This year’s partners include the city’s Office of Cultural Affairs, the Jersey City Economic Development Corporation, South House Bar and Restaurant, Suntex Marinas Jersey, Jersey City’s Stop the Drop Anti-Litter Campaign, and Grucci, America’s First Family of Fireworks.

For more information on the event, transportation, what to bring, and more visit www.FreedomAndFireworks.com or the city’s social media pages.

TRANSPORTATION TO THE EVENT

Anyone attending the event is strongly encouraged to arrive by foot, bike, or public transportation.

Guests utilizing the PATH train system to either the Exchange Place or Grove Street stations and should check the PATH website at http://www.panynj.gov/path/full-schedules.html for an updated holiday schedule.

Parking, although limited, will be available throughout the city. Visitors are advised to use only registered and licensed parking facilities. Check with lot operators for fees and hours of operation.

BAGS/BACKPACKS/COOLERS ARE SUBJECT TO SEARCH
Please be advised that any bags brought to the event are subject to search by law enforcement authorities. Attendees are encouraged to pack belongings in clear bags that show contents. For a full list of what can be carried into the festival and what is banned, please visit http://freedomandfireworks.com/what-to-bring/.