A LIFE IN ART 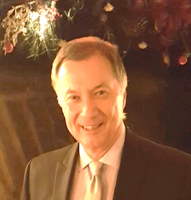 A life in art, that’s exactly what William La Rosa set out to do in his 30-year tenure as Director of the Hudson County Office of Cultural Affairs. Before retiring in September 2017, La Rosa facilitated programs that helped local visual and performing artists. He founded the Local Arts Program (LAP) grants that, over the years, provided thousands of dollars to local artists and arts organizations.

On Tuesday, June 26, from 6:30-10 pm, the Jersey City Theater Center will honor La Rosa contribution to Hudson’s art scene with an award for Lifetime Achievement in Arts and Culture. The event also celebrates JCTCs 12-Year Anniversary and will be held at White Eagle Hall on Newark Ave in Jersey City. The $100 ticket price includes open bar, hot & cold hors d’oeuvres and jazz from the Hudson Banks Trio.

“Bill La Rosa always saw the arts as a means to unite the community,” Olga Levina, Artistic Director of JCTC says. “As Director of the Hudson County Office of Cultural Affairs, Bill always came from a place of love for the arts and respect for artists, giving them the attention they deserve. No arts organization can stand alone, and Bill has been a supporter of JCTC from the very beginning. It is an honor for JCTC to give our first lifetime achievement award to someone who made a difference in the arts in Hudson County and New Jersey.”

La Rosa’s support, consultation and encouragement to arts organizations and artists in Hudson never wavered. A graduate of New Jersey City University and New York University, La Rosa served as Vice President of the Association of New Jersey County Cultural & Historic Agencies, and as a member of the New Jersey Center for Hospitality and Tourism Advisory Council. In 2000, he was acknowledged by a Joint Legislative Resolution from the New Jersey State Senate and General Assembly for “meritorious record of service, leadership, and commitment on behalf of the New Jersey tourism industry.”  He is the recipient of various community service and New Jersey Association of Counties awards, served as the Chairperson of the Product Development Committee for the New Jersey White House Conference on Tourism Task Force (1993), is a member of the County Open Space Trust Advisory Board, and Chairperson of the Hudson County Public Art Commission.