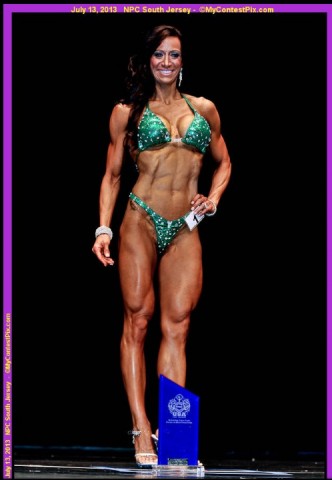 At 29, Danielle Lenardo of Bayonne received news every woman dreads, she had breast cancer. After going through chemotherapy and beating the cancer, Lenardo hit the gym to strengthen her body, mind and spirit. She not only strengthened, she built some serious muscle.

In June 2013, Lenardo took her new muscular physique and competed in the NPC (National Physique Committee) Championship Competition where she won First Place in Figure in all divisions. In November, she won her Pro card in Figure with the NGA (National Gym

On Fri, April 11 at 7 pm, the night before the NJ Golden Gloves’ Open Championship bouts, the IBEW (International Brotherhood of Electrical Workers) Local 164 will host its annual NJ Golden Gloves Novice Championships bouts. The championship is also a boxing charity event that raises money for the Project Grandma breast cancer fund. (The fund was named Project Grandma about 20 year ago by IBEW Local 164 because all women should live long enough to be a grandma!)

A highlight of this year’s event, organized by Golden Gloves trainers Tommy Ewaska and Paul Dunleavy and Local 164 business agent Keith Misciagna, will be when they honor Lenardo with the Heart of a Champion award.

“Every year we give the Heart of a Champion award,” Dunleavy says. “Chuck Wepner of Bayonne, who fought Muhammad Ali got it one year. This year, we decided to give it to a woman and who better than Danielle Lenardo. She had cancer and she’s 10 years passed that. She got her pro body-building license. She’s an inspiration. ”

A Pro Figure competitor, Lenardo, 41, trains at the Forum Fitness gym in Bayonne.

“Pro Figure Competition is when you go on stage and pose and you’re judged by symmetry, muscularity and stage presence,” Lenardo says.

Always into fitness, after she beat cancer Lenardo threw her heart and soul into training so she could be as healthy as possible.  She works out at the gym six days a week, where she lifts weights and does kettle bell and sandbag training. She also works full-time teaching “Pre-k” in Jersey City. Lenardo says lifting weights and becoming a body-builder was her way of fighting back after her cancer diagnosis and her refusal to feel like a victim.

“When I’m lifting heavy weight or my trainer is pushing me I feel strong and know if I want to do something and set my mind to it, I can,” Lenardo says. “Whenever I leave the gym I always feel one-hundred percent stronger. I would recommend other women do it. Especially women who are in remission or recovery. It’s so much better than sitting home and it’s a proven fact that exercise helps reduce the chance of recurrence.”

Lenardo doesn’t consider herself a power-lifter and says she’s more about endurance, although she can lift 195 pounds.

“When I train in the gym, some guys say to me, ‘I want to be you when I grow up’,” Lenardo laughs.

Being a body-builder excites her, Lenardo says, and she never asks ‘Why me?’ when referring to her bout with breast cancer. Instead, she believes the experience has made her a stronger person.

Meanwhile, she’s very excited and looking forward to receiving the Heart of a Champion award on April 11. The award is being custom-made by Sartonk of Union City.

“For them to honor me, I hold it very close to my heart,” Lenardo says. “It truly is a mission in my life to raise awareness. I could have crawled under my covers or stand up and fight and I stood up and fought and I did it for my children and my husband. You come out of it a stronger person and with a different view of things you took for granted. There is life after breast cancer.”

Founded in 1901, Local 164 remains dedicated to the IBEW’s objective to help make life better for its members and those around them. Originally established with exclusive jurisdiction in Hudson County, Local 164 was expanded to include Bergen County in 1928 and Essex County in June 2000.

At this year’s boxing charity event, there will be special guests, past Golden Gloves contenders and champs including Roy Mercer, Mark Medal, Vito Antuofurmo, Bobby Czyz, and Larry Barnes who will sign autographs and take pictures with guests and their children. Dunleavy says most boxers are gentlemen and givers.

“These guys who are supposed to be so animalistic are really compassionate people” Dunleavy says.