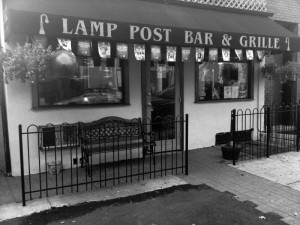 Downtown Jersey City looked a lot different back in the day and on Second Street, between Monmouth and Brunswick Streets, the neighborhood bar known first as The Village Pub and  and then renamed the My Way Lounge attracted blue collar regulars who bellied up to the bar for some beers and small talk.

Ten years ago, Tom Egar and his sister-in-law Michelle Egar, who grew up in the same neighborhood bought Miller’s Pub with their friend Monica Kress. They renovated, updated and renamed it The Lamp Post Bar & Grille and although some things have changed, The Lamp Post has kept its connection to the neighborhood by offering hearty dishes at good prices in a welcoming atmosphere.
“This has always been a neighborhood bar,” Tom Egar says. “Michelle and I were raised in this neighborhood. Her father was a butcher. My father was raised on this block also. We’ve been staples in the neighborhood for quite some time.”

Growing up in the neighborhood and working together in a family-run business adds to the charm of the place and The Lamp Post’s menu of American cuisine gives diners that feeling of home-cooked meals in Mom’s kitchen. No dainty portions here, the appetizers and entrees are both delicious and big and customers have a choice of French fries, onion rings or a side salad with every meal.

“We like feeding the neighborhood, it’s a good experience,” Egar says. “It’s a lot of work and a lot of rewards. While I was growing up in the neighborhood, a lot of families moved out and now there are a lot of new faces and we’re getting to know the people. For me it’s starting to become more of a neighborhood like I knew.”

The Lamp Post runs a string of weekly specials, too, a feel-good selection of soups, salads, apps and entrees to warm the spirits during these cold winter days. Hearty soups like a big bowl of Cream of Potato and Bacon soup ($5.95) apps like Artichoke Heart Francaise ($7.95,) home-made Hummus with Grilled Pita bread ($7.95) and Roasted Stuffed Mushrooms ($7.75.) For dinner, the Sloppy Joe sandwich is a tasty blend of burger and spicy sauce ($8.95,) and the Spaghetti Bolognese ($11.50) and Ham Steak with Sweet Potato Puree and Marinated Grilled Asparagus ($12.95) are two fantastic dishes.

“All our plates are oversized and our prices are undersized,” Egar says.  I’m a big guy, 6’2″, 300 pounds and I have trouble finishing my plate. You’re gonna walk away with a happy belly.”

You’re going to need some special brews to go with those oversized portions, too, and when Egar and his partners took over the bar, one of the first changes they made was to install a high-tech, 8 Tap System that keeps draft beer at a cool 32 degrees.

“Our beer is the coldest downtown,” Egar says.

The Lamp Post not only brings the bar to the neighborhood, it’s brought the neighborhood to the bar, serving several tap beers brewed at a North Bergen brewery like the Garden State Stout, the 1787 Abbey Single, The Hudson Pale Ale and Weehawken Wee Heavy ($6; $5 at Happy Hour.)

“The brewery is in North Bergen and the Brew Masters live in Jersey City,” Egar says. “They ran into our chef and we invited them to stop by. They brought a couple of samples and we put them on tap. They’re selling pretty well. They’re micro-brews but they have a flavor of a National brewery. They’re not crazy tasting.”

Egar and his partners also keep things lively for their customers with Karaoke on Friday nights and local bands performing Saturday nights. They invite local artists to exhibit their art on the walls and right now you can see the work of local photographer Francis LaMonica on display.

And for sports fans, The Lamp Post Bar & Grille boasts seven flat-screen TVs and a Monday night football special: During the telecast games, customers can eat Buffalo Wings and drink domestic beers right up through the 4th Quarter for only $20.

“This bar is a little bit of everything,” Egar says. “It’s a place anybody can walk in and be comfortable. We put butcher paper and crayons on the table for the kids. We did photos with Santa. Amongst us, we have seven kids. It’s important to us to make the place kid-friendly. Don’t worry about the kids throwing stuff on the floor or having a tantrum. We’re all good with it.”