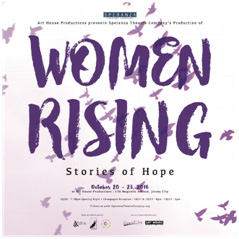 Power and control – two red flags of bad behavior when it comes to relationships, but sometimes a person doesn’t know what they’re getting into until it’s too late. Situations like this are the basis of a new collaborative play by Jersey City’s Speranza Theatre Company and Women Rising, a refuge, resource and referral for survivors of domestic violence.

“It’s a play about survivors of domestic violence, the staff members of Women Rising, and the police officers and friends who have helped them survive,” Heather Wahl, Producing & Artistic Director of Speranza Theatre Company says. “We started this process a year ago by interviewing people who have personal connections to domestic violence. The interviews are anonymous but the words and feelings they evoke show throughout the play.”

“We hope this play will start a conversation about domestic violence,” Wahl says. “It’s learned behavior, it’s generational, but it doesn’t discriminate. That’s something we’re trying to show in this play; it can happen to anybody. You hear a lot of different voices from different cultures. You hear from a young Latina, and an Indian woman in an arranged marriage whose mother-in-law abused her. The monologues are all inspired from true stories.”

It was about a year ago that Wahl and her staff reached out to Women Rising’s Joaneileen Coughlan, Director of Domestic Violence Services at Women Rising, to see if the non-profit would be open to collaborating on a play about domestic violence. The two groups have worked joined forces on other projects, too.

“A lot of fundraisers Speranza Theatre Company does, including our annual production of ‘The Vagina Monologues’ have been partnered with Women Rising,” Wahl says. “With WOMEN RISING: Stories of Hope, everyone was excited to have another venue to discuss domestic violence with the community.”

Domestic violence is a tough topic to tackle, but Wahl knows people who have experienced domestic violence and it’s important to get the issue out in the open, she says.

“Even though I’m not a survivor, I know survivors, I can empathize with them,” Wahl says. “I know we can make a difference with this play. One of the big things about domestic violence is that it does not discriminate. There’s no one socio-economic group or race or culture or religion —it doesn’t pigeon-hole any of these categories. Rich, poor, a lot of the survivors were Caucasian, well off, well-educated. These were smart women. How did it happen? It happens over time. The batterer slowly starts to isolate you, control you and take away your power. For these women, they didn’t realize until they were too far in.  Then they asked, how did this happen to me? I’m a smart girl, how did this happen to me?”
WOMEN RISING: Stories of Hope will be going on tour at colleges, women’s organizations, and churches through the Tri-State area and the show is available for bookings, Wahl says. After the production at Art House, Speranza will be presenting the play for students and faculty at Hudson County Community College on Oct. 27th.

“For the shows in Jersey City, we’re doing a dress rehearsal in front of an audience on Wednesday, October 19th,” Wahl says. “It’s open to the public and ‘pay what you can’ night. Any amount of cash. All the proceeds go straight to Women Rising. Whether it is one dollar or a hundred, it all goes to Women Rising.”

Joaneileen Coughlan is the Director of Domestic Violence Services at Women Rising and sees the play as a new way to get their message across.

“I’m really excited to be doing something different to raise awareness of domestic violence,” Coughlan says. “I believe this play will definitely have an impact.”

Tix can also be purchased at the door: $20 (cash only, please)