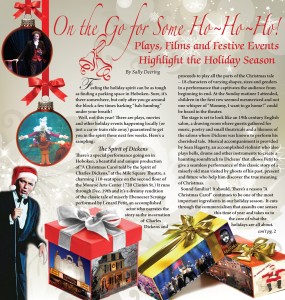 River View Observer Holiday Picks -On the Go for Some Ho-Ho-Ho!

Feeling the holiday spirit can be as tough as finding a parking space in Hoboken. Sure, it’s there somewhere, but only after you go around the block a few times barking “bah-humbug” under your breath!

Well, not this year! There are plays, movies and other holiday events happening locally (or just a car or train ride away) guaranteed to get you in the spirit these next few weeks. Here’s a sampling:

The Spirit of Dickens

There’s a special performance going on in Hoboken, a beautiful and unique production of “A Christmas Carol told by the Spirit of Charles Dickens,” at the Mile Square Theatre, a charming 110-seat space on the second floor of the Monroe Arts Center (720 Clinton St.) It runs through Dec. 19th and it’s a dreamy rendition of the classic tale of miserly Ebeneezer Scrooge performed by Lenard Petit, an accomplished actor who narrates the story as the incarnation of Charles Dickens and proceeds to play all the parts of the Christmas tale – 18 characters of varying shapes, sizes and genders in a performance that captivates the audience from beginning to end. At the Sunday matinee I attended, children in the first row seemed mesmerized and not one whisper of “Mommy, I want to go home!” could be heard in the theater.

The stage is set to look like an 19th century English salon, a drawing room where guests gathered for music, poetry and small theatricals and a likeness of the salons where Dickens was known to perform his cherished tale.  Musical accompaniment is provided by Sean Hagerty, an accomplished violinist who also plays bells, drums and other instruments to create a haunting soundtrack to Dickens’ that allows Petit to give a seamless performance of this classic story of a miserly old man visited by ghosts of his past, present and future who help him discover the true meaning of Christmas.

Sound familiar? It should. There’s a reason “A Christmas Carol” continues to be one of the most important ingredients in our holiday season.  It cuts through the commercialism that assaults our senses this time of year and takes us to the core of what the holidays are all about. And Petit as Dickens and the other 18 characters he plays brings this story to life in a lyrical and intimate performance that’s pure magic.  Take the family; take your friends, don’t miss it! (www.milesquaretheatre.org)

Ebeneezer on the Silver Screen

If you’d like to see a more modern Scrooge – and on a big movie screen – then why not catch the movie musical “Scrooge” starring Albert Finney and Alec Guinness playing at the beautifully-restored Loew’s Jersey Theatre, a landmark movie palace in Jersey City (right across the street from the Journal Square PATH Station) on Sat, Dec. 11th, 6:30-9:30 pm, where you can view this glorious black-and-white film on a big movie screen. There will also be a holiday concert and sing-along. (201-798-6055)

Writer David Sedaris (who penned “Me Talk Pretty One Day” and other contemporary works,) once spent Christmas working as an elf in Macy’s Santaland.  Sedaris wrote a play about his experiences, “The Santaland Diaries,” which is being presented by The Theater Company in Hoboken on weekends at the Monroe Arts Center from Dec. 9-19th (lots of free parking and a block from the 9th Street Station on the Hudson-Bergen Light Rail.) This hilarious show about the trials and tribulations Sedaris encountered as an elf will put you in a fabulous holiday mood and the material is a little “adult’ so get a babysitter and make a night of it! (www.thetheatercompany.org)

Celebrating Frank Sinatra’s 95th Birthday, The City of Hoboken, Projected Images of Hudson County and Steven’s Institute of Technology (SIT) Division of Technology and the Arts presents “The Legend & Legacy of Frank Sinatra,” an evening of rare TV, concert and movie performances from the archives of historian Bill Shelley. Performances include Young at Heart, Strangers in the Night, My Way, New York, New York, It Was a Very Good Year, That’s Life, High Hopes, Lady Is a Tramp, and more. Also featured are excerpts of musical performances from his favorite Hollywood films including High Society, Young at Heart, On the Town, Robin and the 7 Hoods, and Pal Joey. These rare clips also feature Sinatra duets with Dean Martin, Sammy Davis, Jr., Bing Crosby, Ella Fitzgerald, Louis Armstrong, and Elvis. It happens Sat. Dec 11th starting at 7 pm at the DeBaun Auditorium, 5th Street (between Hudson St and River Terrace,) on the campus of SIT. Proceeds go to Hoboken’s Movies under the Stars Series 2011. (201-217-4077)

Holiday Happenings off the Pike

A short ride to Milburn will take you to 19th Century France and a beautiful performance of “Les Miserables” at the Papermill Playhouse (3 Brookside Drive) by a touring company that has played to appreciative audiences throughout the U.K and Jersey’s no exception. Audiences are rising to their feet for this redux of the Broadway production. This “Les Miz” is a smaller show  – no spinning turntable onstage – but its message of hope still resounds and to hear that beautiful song “Bring Him Home” sung by Jean Valjean is worth the price of admission. “Les Miz” performs through Dec. 30th. (973-376-4343, www.papermill.org)

Remember when your family took long drives to “ooh” and “ah” the holiday decorations on other people’s houses?  Well, you can put that memory in your pocket and make a new one with a visit to the Cape May Christmas Candlelight House Tour, a self-guided tour of more than 20 bed & breakfast inns, guest houses, hotels and churches decorated for the Christmas season. It happens throughout December with free shuttle service (heated trolleys) and refreshment stations offering fresh baked cookies, Wassail punch, coffee and tea. (Call for dates and times: 609-884-5508.)

Tour five of Cape May’s historic bed and breakfast inns decorated for the holidays on Dec. 5, 12, 19 and 20, 7 to 9 pm. At the Carriage House of the Emlen Physick Estate on Washington Street, tour-goers can enjoy home-baked goods and other refreshments and take in the latest exhibit in the Carriage House Gallery. (Tickets can be purchased at the Washington Street Mall Information Booth.)

If you’re in the neighborhood of Camden, why not stop by the Adventure Aquarium on the Camden Waterfront for “Christmas with the Fishes,” where the aquarium is transformed into a winter wonderland with twinkling lights, glowing trees, gently falling snow and appearances by “Scuba Santa” who dives into Ocean Realm – Adventure Aquarium’s largest underwater exhibit and swims among sea turtles, hammerheads, stingrays, tiger sharks and schools of fish.  There are other events, too, great for the kids! “Christmas with the Fishes” runs through Jan 2nd. (856-365-3300, www.adventureaquarium.com)