When the Yellow Brick Road Hits a Speed-bump,these seven Hudsonities follow their hearts 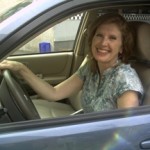 when the stock market crashed and people lost their savings, their jobs and sometimes their lives. But many of us do remember the Dotcom crash of 1987 that caused the stock market to nosedive and Internet entrepreneurs to lose their cybershirts. Well, here we are again, folks, rafting through the troubled waters of another

recession in a yellow rubber dingy without a paddle.
Uncle Sam is up to his red, white and blues in I.O.U.’s. We owe a trillion and change to to China and according to CreditCard.com, every household in America has more than $8 grand in credit card debt with no end in sight. But Americans are a rugged bunch. When all we have are lemons in the fridge, we thumb our nose at the bad times and toast to better days with a swig of lemonade.
It’s the American Way and it’s the Hudson way, too.

Here are a handful of Hudsonites dealing with our tough economic times and in the process, they keep a positive outlook on a cloudy horizon. And what seems to be evident for all of these folks is that when the economic gloom rains down, they slip on a smile, open their umbrellas and dance in the puddles. 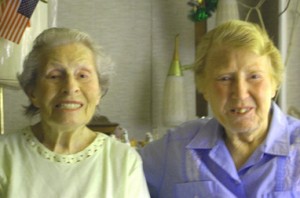 Grace Stenlake and Frances Oakley of Jersey City are living proof that you can get through the hard times with a song in your heart and a swing in your step. Living on fixed incomes, the two sisters keep a busy social life that includes free concerts in Hudson and boat rides on the Hudson. And they keep company with other gals and guys at the West Hudson senior center. By the way, Grace is 90 and Frances is 101.
Frances remembers the day of the stock market crash of 1929. She was waiting for her beau – a stock broker and her future husband — to take her out on a date, but he never showed up.  The next day, he came by to tell her he had been up all night informing clients that they had lost everything.
And as the Great Depression wore on, Frances recalls neighbor-helping-neighbor.
“I had three children and my next-door neighbor had five children,” Frances says. “She would get a cauliflower and give me the leaves and I would make a sauce when them. We used everything.”
Back in the day, Frances and Grace were members of an all-girl band, the North Hudson Girls F D & B Corps where Frances tapped out tunes on the glockenspiel and Grace served as band director and played the fife.  She also twirled batons.
Grace appeared with Ed Sullivan at the closing of Ellis Island and performed with several Big Bands.
“I was very lucky,” Grace says. “I traveled all over. I played with the Paul Whiteman Orchestra and Johnny Pineapple and His Hawaiian Orchestra. I was All-American Fifer for Hawaii, the U.S. and Canada.”
And when it comes to getting through hard times, Grace’s philosophy is simple.
“You have to make your life fun,” Grace says. “Do something to make it fun.”

Monya and Brian McCarty of Jersey City rely on each other during the hard times and keep the quality of their lives set on “happy.”
Monya remembers the Dotcom crash of 1989 and how it put Brian out of a job and on the unemployment line.
“That was the most frightening,” Monya says. “We had three kids at the time, the youngest was three, and I hadn’t worked in four years. While Brian looked for design work, I got a waitress job at Arthur’s Landing in Weehawken. Then Brian started to do freelance design which led him to the job he has now.”
During the Dotcom recession, Monya took a new career path and she now holds a Bachelor of Science degree in nursing and works as school nurse for the Learning Community Charter School in Jersey City.  And when Brian freelanced, he decided to try something he always wanted to do – improvisational acting.  It was not only fun, but it gave him a platform to express his sense of humor, a gift Monya says that keeps the family in high spirits no matter how tough things get.
“My husband sees life from the absurd point of view,” Monya says. “I’m grateful to have a husband who’s funny.”
The McCarty’s oldest son just graduated from Rutgers University and their youngest is a student at McNair High School, heading to college in a couple of years. And as the McCartys brace themselves for another college tuition, their family has something priceless – a fun dad with a wit that fills a home with laughter.
Starting a family can be tough during an economic slow-down, especially when you have  a business. 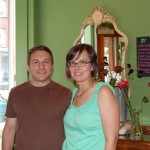 Angie and Michael Schwartz are the owners of Antheia floral shop and design on Montgomery Street in Jersey City (www.Antheia.net) a tiny storefront that looks like its right out of a scene from “My Fair Lady.” Potted flowers and plants adorn the entrance and the windows are filled with pretty floral arrangements. The shop specializes in weddings, birthdays and other celebrations and although business has dropped some, the Schwartzes are positive about the future.
“There’s no reason to freak out,” Angie says. “People are still getting married and even though they’re spending less, we’re still able to be creative.”
Several stores in the neighborhood have already closed, so Angie and Michael make it a point to shop locally and support other Grove Street store owners, who do the same for them.
“It’s brought the Grove Street store owners closer together,” Angie says.
The recession has also given Angie and Michael more time to plan their future and in a few months, two becomes three when they bring home their new adopted baby.
“We have a lot to look forward to,” Angie says. 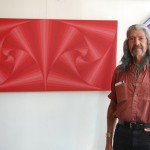 a lifelong passion to paint has kept him going during hard times. A Scot raised in England, Bill studied art in London and immigrated to the US in 1978. And while painting abstracts in the home-studio he shared with his wife, writer Ahn Behrens, Bill freelanced as a finisher making high-end packaging for the cosmetics industry.  When the economy went south, Bill lost his job and now pays his bills solely from the sale of his paintings.
His work can be seen at LITM restaurant and bar on Newark Avenue in Jersey City. The show, called “Hanging Around,” is a collection of Bill’s abstracts, one of which is very personal to him. A little more than a year ago, Ahn died suddenly and Bill expressed his feelings in a painting of red, undulating waves called “I Grieve No More. “ He dedicates the painting to Ahn.
Bill says painting drives him, both emotionally and financially.
“Painting keeps me going,” Bill says. “It’s a humble life.” 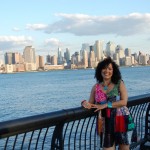 It’s the actor’s life, for Margo Singaliese, a Hoboken school teacher who splits her time between the classroom and the stage. When the recession hit, Singaliese decided to rethink her spending habits and as she did, she realized that all the money she put down eating out and shopping at fancy boutiques wasn’t fulfilling and when she returned to her first love, acting, her life changed.
“The recession made me get back to the roots of what I love — arts, theater and home life,” Singaliese says. “I have a great relationship at home. We watch movies, cook dinner for friends and my life has more meaning because of tightening my belt.”
These days Singaliese spends her time rehearsing a show that will be performed at the Fringe Festival in New York. But her life changed in another way, too. Realizing she had become a spendthrift, Singaliese made a conscious decision to give to charity and every month she sends a check to Women for Women International, an organization that helps poor women rebuild their lives and families. Singaliese’s donations help a mother of six, a victim of the rape camps in Rwanda, care for her family and even run a little business.
“The recession helped me realize all the money I wasted,” Singaliese says. “And if this Rwandan mother can care for her family on the small amount that I send, I can certainly live within my means.  I was foolish to waste so much money on meaningless things. This woman became my role model. She taught me.”

Actors, musicians, and other eclectic types are a welcome sight at 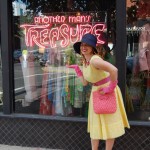 Another Man’s Treasures, a vintage store on Grove Street in Jersey City owned by Meika and Warren Franz (www.AMTvintage.com.) Visitors step inside the corner storefront and enter a world of retromania that dazzles the eye and tickles the memories. Sinatra-like fedoras from the 1940s, chiffon cocktail dresses from the 1950s, hippie-dippie shirts from the Woodstock generation and other trendy garments line the racks and shelves while store assistant, Laura Schaffnit of Jersey City helps customers find their inner-kitsch.
“The recession affected business a little bit,” Warren says, “but nobody wants to go into a shop and hear doom and gloom. We have music, good lighting, you step into a different world and forget.  It’s a charmed atmosphere, a trip down memory lane.”
Because business is slow in the summer months, the Warrens participate every Friday in the Artisan Market outside the Grove Street PATH station, where they sell vintage T-shirts and other bargains.
“Vintage is fun,” Warren says. “If you can’t afford a new dress, buy a vintage necklace, instead. It’s a cheap way to cheer up. Vintage is good for that.”
And for fun, the Franzes dress up in, what else? vintage clothes. They go to trade shows, flea markets and not only buy things for the shop, but also for themselves. Warren prefers styles from the 70s and Meika likes the Roaring 20s.
“When it comes to vintage, we’re like moths to a flame,” Warren says. “And when I go home to visit family in England, Meika and I go straight for the flea markets.” 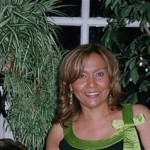 Fun has taken on a whole new meaning for Martha Higuera of West New York. Because of the recession, she now spends her time cooking, foregoing spending sprees at the mall and sharing quality time with her family.
An account executive, Higuera earned her Real Estate license a few years back, but shies away from breaking into the field while the housing market is in such flux. And since the recession hit, she has taken stock of her life and her spending habits.
“Instead of killing time at the mall, I now use the time to be with other people,” Higuera says. “My girlfriend has cookouts and she invites all the girls for a get together and its fun. I didn’t do that before. And I’m spending more time with my family. When you go through hard times, you realize who’s close to you and who’s not. Who’s there for you and who’s not.”