“Who am I?” It’s a question people have pondered since the dawn of time. And these days, it’s not enough to know how you fit in with your immediate family; people are now turning to websites like Ancestry.com to dig up the roots of their family’s tree. This trend is so popular, hit TV shows like “Finding your Roots” on PBS and “Who Do You Think You Are?” on NBC are attracting high ratings from viewers tuning in to watch stars like Samuel L. Jackson, Kevin Bacon, Edie Falco, Rob Lowe and Rosie O’Donnell discover the secrets of their family’s past.

In November 2010, the New Jersey Room of the Jersey City Free Public Library and its staff were featured in one of the episodes of NBC’s “Who Do You Think You Are?” when O’Donnell came to the New Jersey Room to do genealogy search into her Irish background.  The show took O’Donnell on a journey that included a trip to Ireland, where she visited a workhouse where one of her relatives had lived. Both “Finding your Roots” and “Who Do You Think You Are” are filled with touching moments like these, and for viewers, the shows have helped a renewed interest in the past so that we might learn more about ourselves. 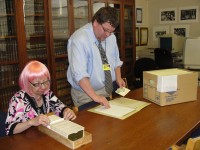 At the New Jersey Room on Tues, May 22nd, Library Assistant Danny Klein will be hosting “Who Do You Think You Are?” for local genealogy enthusiasts looking for clues to their past. The New Jersey Room is a treasure trove of resources and Klein says the two-hour workshop will show people how to trace their relatives using city directories and local maps that date back to the 1600s.

“We’re going to talk a lot about what the New Jersey Room has to offer, which is a lot of information about Jersey City and Hudson County that you’re not going to get any place else,” Klein says,” and that includes the Internet. “We don’t have birth certificates or death certificates or records like that. What we do have are city directories which are the precursor to telephone books that list people who lived in Jersey City and Hoboken and some of the North Hudson towns, dating from 1925 to 1949. So if you’re looking for an ancestor who lived in the area, you can look them up by last name and find out where they lived, sometimes find out what their occupation was, too.”

Since the “Finding your Roots” and “Who Do You Think You Are?” shows have become TV hits, more and more people are searching their roots via websites like Ancestry.com and by joining local genealogical societies.  Klein, who writes a monthly genealogy column for “The Jersey Journal” is also a member of the Hudson County Genealogical and Historical Society that meets the second Saturday of the month in the Secaucus library. (www.hudsoncountynjgenealogy.org) Last month, the meeting was about the newly released 1940 census and in May, the group is planning a road trip to the State History Fair to be held at Washington’s Crossing near Trenton.

A former president of the Society, Klein says he’s always been interested in history and his family lineage and he says he gets a kick out of “the chase.” While researching his family, he recently learned something new about his great-grandfather who emigrated from Germany in the late 1880s and lived in West Hoboken. It seems that in 1914, Klein’s great-grandfather took a trip to Germany in the summer and while visiting relatives there, World War I broke out. He must have lost his passport, Klein says, and went to the American Consulate to apply for a new one. While doing research, Klein tracked down a copy of his great-grandfather’s passport application. It can be pretty thrilling to see documents signed by your ancestors, Klein says: “Seeing the signatures, that’s a big thing.”

So, if you’re interested in starting your own family tree, where do you begin? Klein says: “You start with yourself and move backwards. You know when you were born, when you were married. Those records are easy to get. Then you start working on your parents’ histories and you ask them questions. That’s the easiest way and the most precise way. You don’t want to start three generations ago.”

Klein is a huge fan of websites like Ancestry.com. They’re very helpful, he says, but there’s only so much you can find on the internet. You still have to go out and hit the bricks, he says.

Ultimately, what fascinates and inspires us about genealogical research is seeing all the pieces of the puzzle fit together and the amazing journeys our ancestors took that connect the dots to our own existence.

“So Who Do You Think You Are”

“Who Do You Think You Are”