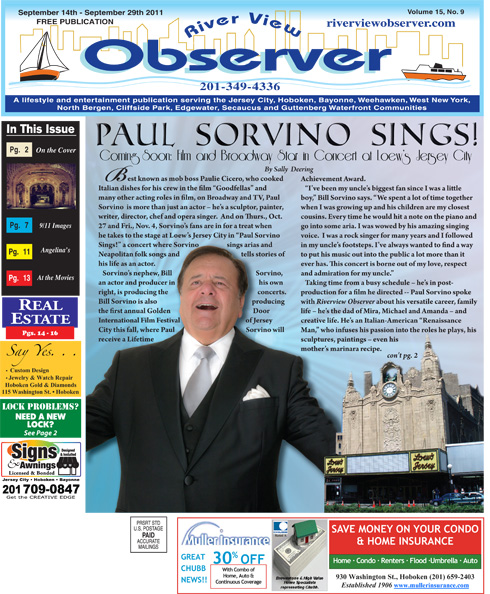 Best known as mob boss Paulie Cicero, who cooked Italian dishes for his crew in the film “Goodfellas” and many other acting roles in film, on Broadway and TV, Paul Sorvino  is more than just an actor – he’s a sculptor, painter, writer, director, chef and opera singer.  And on Thurs., Oct. 27 and Fri., Nov. 4, Sorvino’s fans are in for a treat when he takes to the stage at Loew’s Jersey City in “Paul Sorvino Sings!” a concert where Sorvino sings arias and Neapolitan folk songs and tells stories of his life as an actor.

Sorvino’s nephew, Bill Sorvino, an actor and producer in his own right, is producing the concerts. Bill Sorvino is also producing the first annual Golden Door International Film Festival of Jersey City this fall, where Paul Sorvino will receive a Lifetime Achievement Award.

“I’ve been my uncle’s biggest fan since I was a little boy,” Bill Sorvino says. “We spent a lot of time together when I was growing up and his children are my closest cousins. Every time he would hit a note on the piano and go into some aria. I was wowed by his amazing singing voice.  I was a rock singer for many years and I followed in my uncle’s footsteps. I’ve always wanted to find a way to put his music out into the public a lot more than it ever has. This concert is borne out of my love, respect and admiration for my uncle.”

Taking time from a busy schedule – he’s in post-production for a film he directed — Paul Sorvino spoke with Riverview Observer about his versatile career, family life – he’s the dad of Mira, Michael and Amanda – and creative life. He’s an Italian-American “Renaissance Man,” who infuses his passion into the roles he plays, his sculptures, paintings – even his mother’s marinara recipe.

RVO: When did you discover your love for opera?

PS: My mother was a piano teacher and there was always music in the house. I had two uncles, Uncle Carlo and Uncle Vincent who were great singers from Naples, a baritone and tenor. I always had the idea I wanted to be on the stage. I didn’t know the difference between an actor and a singer I was attuned to beautiful voices. If it’s the sound of the voice you’re looking for it’s not going to be rock and roll it will be opera.  Today, we’re not in a good time for opera singers. Domingo is the most admirable and he’s done so much, a great musician. I like Angela Gheorghiu. She’s my favorite singer right now.

RVO: We know you for your roles in films, TV and Broadway, but were you ever in an opera?

PS: I performed at a gala at the Met and it was very exciting to be on that stage. I made my debut and my audition. I was having vocal problems because of acid reflux. It stops a lot of opera singers in their tracks.

RVO: Your fans remember you as a great cook in “Goodfellas,” can you talk about your line of tomato sauces?

PS: Neapolitans have made marinara for hundreds of years. I just put it in the jar. People don’t know how to make it. They usually put onions and garlic in and by doing that they make it bland. Garlic takes away the sweetness when mixed with onions and they cancel each other out. Marinara is strictly garlic, oil, tomato, basil and a touch of oregano.

RVO: What are you working on now, film-wise?

PS: I just finished a movie. I’m acting, I have projects planned and we’re finishing post production on the movie “The Trouble with Cali,” about a young girl dazzled by a modeling scout who lures her away from ballet. I play her father. My (daughter) Amanda wrote it. I have a couple of other movies I’m preparing to write and direct.

RVO: In real life, you’re more a Renaissance Man; isn’t that somewhat different from the characters you portray?

PS: People who see “Goodfellas” presume that’s what I am (but) my family is noble, goes back hundreds of years. I’m not a gangster. I’m a poet, a best-selling author, director and sculptor. I’m interested in everything.

RVO: What made you start the Paul Sorvino Asthma Foundation and didn’t you also write the book “How to become a Former Asthmatic?”

PS: I started the foundation in 1992 because I had asthma and I learned a way of defeating it through yoga exercises. My book was on the New York Times Best Seller list and I was honored by Dr. Everett Koop for my work with asthma. A lot of performers and athletes do charitable work.  Being a performer or an athlete if you’re that kind of person, your heart goes out easily. Look at Magic Johnson and all he’s done. I’m just doing my thing – ridding the world of asthma

RVO: Your repertoire has been portraying tough guys; but aren’t you more a family man in real life?

PS: I’m different from most other actors who kind of live their lives for themselves. They may have been great artists at the expense of their children, not in support of their children. For me, my career came second and my children come first.

Paul Sorvino in concert at the Loew’s Jersey City promises to be a great evening of music and storytelling. It will also offer Sorvino’s fans a unique opportunity to see a different side of one of their favorite actors, his nephew Bill Sorvino says.

“My uncle’s act includes stories and jokes – in between songs he’ll tell stories of what happened on a film,” Bill Sorvino says. “He’s a great performer and an amazing storyteller. People who see him in concert will get to know him beyond movie and theater roles. And once you do, you get hooked. He comes across so well in his roles, and that underlying personality is what people connect to in his acting. When you hear him sing, tell stories and jokes, you realize he’s an amazing person.”

Tickets are $75 to $125 and can be purchased at www.BrownPaperTickets.com