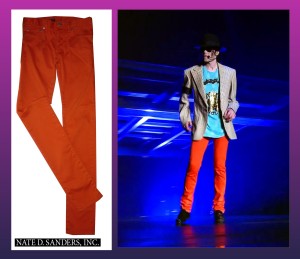 LOS ANGELS, Cal. – May 15, 2010 – In classic dance scenes from Michael Jackson’s legendary final performance, captured on film for the “This Is It” movie, Jackson wears his signature fedora, a sport coat and bright orange pants. This week, the bright orange pants (along with certificates of authenticity and photographic evidence) and other Jackson items will be auctioned by Nate D. Sanders, Inc., one the world’s leading dealers of Hollywood memorabilia, autographs, rare books and gold coins.

The pants, which will be auctioned on Thursday, May 20, are one of the last-know garments worn by Michael Jackson to be captured on film. Other Jackson garments and props have recently capture record-breaking prices at auction. White sequined gloves, a mainstay of Michael Jackson’s wardrobe, have sold recently for more than $400,000. On May 5, a diehard Jackson fan from Costa Rica paid a whopping $170,000 for the glove Jackson used during his 1983 classic “Motown 25” television performance of Billie Jean (where he debuted the “moon walk”). At another auction in New York City, one of Jackson’s flashy gloves captured a fetching $420,000 from a buyer in Hong Kong, China.

The winning bidder in the Sanders auction will get the Jackson-worn pants, photos of Jackson wearing the pants during the taping of “This Is It,” a letter from Jackson’s personal bodyguard (the former owner of the pants) who worked for Jackson until the day of his death on June 25, 2009, and a copy of the bodyguard’s paycheck confirming his employment and relationship with Michael Jackson.

For more than 30 years, Nate D. Sanders has been one of the industry’s most respected experts and dealers.  A collector since the late 1970s, Sanders was already widely known in collectors’ circles when he opened his auction business in Los Angeles in 1990.  Today, he conducts twelve major auctions every year drawing bidders, collectors and investors from around the world.  In recent years, Sanders has been increasingly viewed as an expert on Hollywood memorabilia.

Sanders’ current auction, which closes on Thursday, May 20, 2010, includes the Michael Jackson pants and many other Michael Jackson items. Also in the extensive list of auction items is a handwritten letter by President George Washington, a huge collection of classic sports memorabilia, priceless literary items including letters from Ernest Hemingway and Marilyn Monroe’s personal address and phone book (written in Monroe’s own handwriting, the book is a who’s who of politics and entertainment from the 1950s and early 1960s) .  All of Sanders’ auctions include rare books, autographs, sports collectibles and Hollywood memorabilia.

Sanders’ Brentwood-based business charges “zero percent” consignment rates while most auction companies charge 10 to 20 percent rates for consigned items.  He is always interested in buying unique items and collections.  To learn more about Nate D. Sanders, Inc. and to see a complete listing of items from his current auction, go to www.NateDSanders.com or call (310) 440-2982.