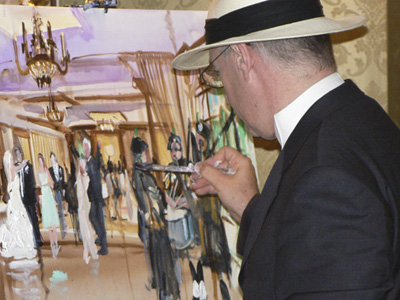 During the course of a party or event the artist creates a picture as the perfect gift to the hosts and a different kind of entertainment for the guests. Original art, from an original idea.

Martin Ashley Hardy is a known landscape and figurative painter who has forged many styles, one of which has evolved into vibrant impressions of upscale corporate and society parties. Using acrylics, Hardy can rapidly capture the people and ambiance of any occasion.
Hardy, who is of English and Canadian origin, has maintained the tradition of plein air painting and is often found working outside all year round. He  is well known for his colorful depictions of Union Square and in 2003,  Toastie’s Deli commissioned a ceiling rotunda of the “Four Seasons of Union Square.”
Hardy has also gained a reputation in the beauty industry for his flattering pastel portraits of customers at the point of purchase for all the major lines of cosmetics including Chanel,  Givenchy,  and Lancome.

In 2004, the “Cherries of Mars Phase One” exhibit celebrated the new landscape aesthetics of our nieghboring planet Mars, with fifty new and ongoing works. Collectors and patrons consistently request his larger scale themes. Currently Hardy is working on a new series of nature paintings exploring the transitions between water and rock. Hardy’s home studio is in Jersey City, but whether a studio is inside, outside, or outer terrestrial, Martin Hardy is spot on a full palette of imagination.
Hardyboyart.com