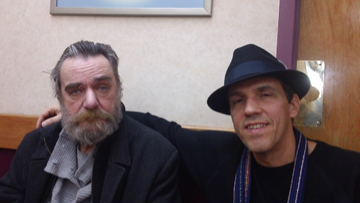 Artists Gregory Stone and Fermin Mendoza grew up in West New York and met each other in 1968, two young artists following artistic pursuits through the turbulent 60s. Through the years, Stone and Mendoza remained friends while continuing their artistic journeys and each artist has several works in LITMs 6th annual “Little Wonders” exhibit of small works by many local artists.

More than 20 artists’ works – nothing larger than 14 inches – are on sale for the holidays. Stone, an Impressionist who works in several mediums including computer software, has 7 works in “Little Wonders” with titles like “Snow, after the Dogs and Cats get through with It”, “Wedding Ceremony” and “The Crossing Guard.”

“I sold a piece at ‘Little Wonders’ an old pencil portrait of me, put color to it on the computer and had it printed on canvas,” Stone says. “It became a totally different piece of art. I refer to it as ‘Mixed Media’. I think if Da Vinci had a computer, he would have used it, too.”

Mendoza chose to run with the exhibit’s “Little Wonders” theme and created 10 portraits of music legend Stevie Wonder at different stages of his career. Each is 6 inches-by-6 inches and made with stencil, spray paint, colored pencil and oil paint on corrugated cardboard. Mendoza says he was surprised when some exhibit visitors didn’t know Stevie Wonder, but he takes it as a sign of youth, not relevance. That perspective also applies to exhibiting pieces that were created years back.

LITM, a restaurant/bar/lounge/gallery on Newark Street in Jersey City opens its walls to artists giving them the opportunity to showcase their work to appreciative audiences. LITM changes exhibits monthly and hosts group and solo shows presented by emerging contemporary artists.

“I called Gregory and told him ‘you gotta submit a piece’ and he got into the ‘Where’ show, too,” Mendoza says.

Married 37 years, Mendoza also raised two children. He then went back to college and took art classes at the School of Visual Arts in New York.

“I went back to my inner child,” Mendoza says, “That’s what you’re creating from.”

Stone met Mendoza in 1968, the year Stone graduated from Memorial High School in West New York and Mendoza was entering as a freshman. They both were encouraged by the school’s art teacher Ellen Marchant, who helped Stone get into the Phoenix Art School in New York. She also mentored Mendoza whose art training began with the Famous Artists School that sold correspondence courses in art and advertised on matchbook covers

“They would have a pirate or a dog on the matchbook cover,” Mendoza says, “and my sister did the ballerina and I did the pirate and we both got accepted. My father didn’t want to pay for two courses. ‘I’m paying for one course and you two share the books,’ he told us. Officially it was hers, so every week she had an assignment and after the first couple of months she started missing a week and would say to me, ‘here, you do it.’ I started doing her stuff and she was getting the credit. Then we got a letter from our teacher. ‘What’s wrong? Your style has changed. It’s totally different. Are you under emotional stress?”

The two friends went their separate ways, but always stayed in touch. Then a few years back, Stone had an opportunity to show his work at The Coffee Machine coffee house in Ridgefield Park and he asked Mendoza to curate the show.

Stone and Mendoza say they’re excited about exhibiting at LITM and the opportunity to connect with other artists in Jersey City, where the art scene has sprung to life.

“Jersey City has the third highest artist population,” Mendoza says. “So Gregory and I feel there’s a lot of opportunity there for us to reconnect and resume our artistic pursuits.”